Home / Stories / Rising to the Challenge

Rising to the Challenge

Descended from a Samoan family of missionaries and church ministers who provided pastoral care across the Pacific generations ago, Delphina Soti recalls listening to stories of past sabbaticals partaken in the Pacific which led to her devoting her life to service. 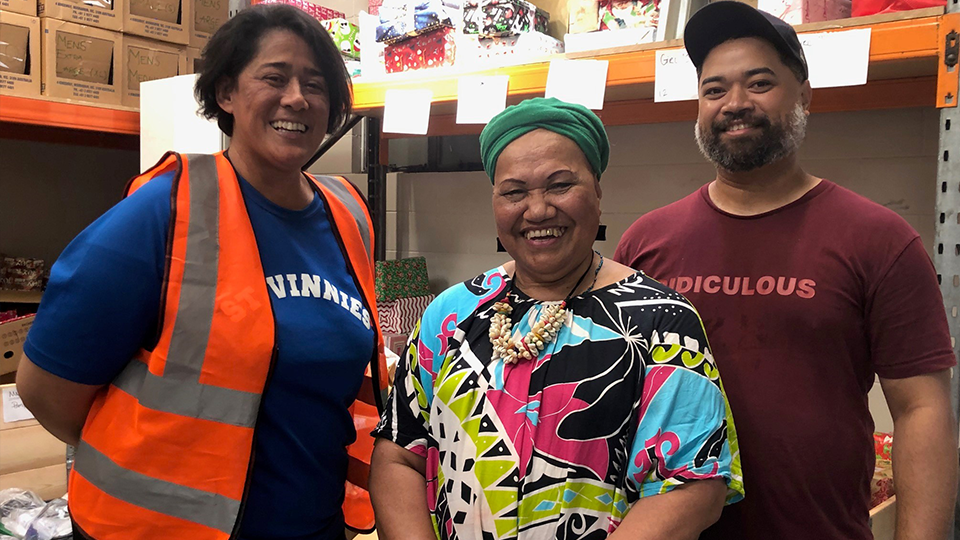 As General Manager at the Auckland Society of St Vincent de Paul’s Foodbank tucked away in the inner-city suburb of Newton, Delphina sees first-hand the ongoing challenges meeting an ever-growing demand for food for families in New Zealand’s largest city. What this instils in her is a genuine sense of belonging and pride seeing Pacific youth rising to the challenge to help others who are vulnerable.

Her own upbringing as a youth is a far cry from the environment she lives in today.

“We came from a family of church ministers over many generations and grew up in the villages of Leauva’a and Sogi in Samoa where my parents and grandparents served,” she recalls.

“It sounds idyllic and picturesque and, looking back for the most part, it was. Growing up in Samoa as a faifeau’s kid gifted me with a lot of the skills and insight I have today. It has gifted me my faith, shaped my work ethic, tautua, compassion and my resourcefulness, making sure nothing is wasted. It’s in how I relate in terms of va tapuia. (sacred spaces).”

On arriving in New Zealand in the late 1990s to pursue tertiary studies, Delphina sought a place where she felt she truly belonged. She enrolled at Canterbury University to pursue her education. Having aiga living in Christchurch helped, so she joined the local Pacific Island Presbyterian Church (PIC).

“Joining the church there was the springboard to what I do now,” she says.

“I moved to Auckland in 2000 and joined the St Vincent de Paul, a Catholic faith-based organisation as a volunteer youth worker and loved it.  Many of the participants were laypeople, ordinary folk who just wanted to help with what they knew was a worthy cause. Their work ranged from foodbanks, prison work, homelessness, visiting the sick. It was not limited to advocating for the poor. As a youth worker, I was tasked with raising awareness about poverty and providing a platform for young people to volunteer and become part of the solution.

The Society of St Vincent de Paul is an international voluntary organisation of the Catholic Church, founded in 1833 for the sanctification of its members by personal service to the poor.  Delphina joined with her absolute belief in the duty to uphold one another’s dignity through the provision of the basics, such as providing enough food to eat and building connections through visiting people.

Now based at the St Vincent de Paul Society Foodbank (Young Vinnies) in the central Auckland suburb of Newton, Delphina and her dedicated team expanded to meet the growing demands to feed the city’s homeless and hungry.

Having joined the Young Vinnies programme, Delphina participated with her team by launching a food programme within the secondary schools and tertiary institutions in Auckland.

“We’re now in 17 colleges and several tertiary outfits, which include non-Catholic schools as well, totalling 1600 young people from the age of 13 through to 35,” she says.

“Many of those who run the programmes are themselves students who are also volunteering their own time. Then there are the parents who also support the mahi by delivering food and setting up satellite foodbanks in their homes.” 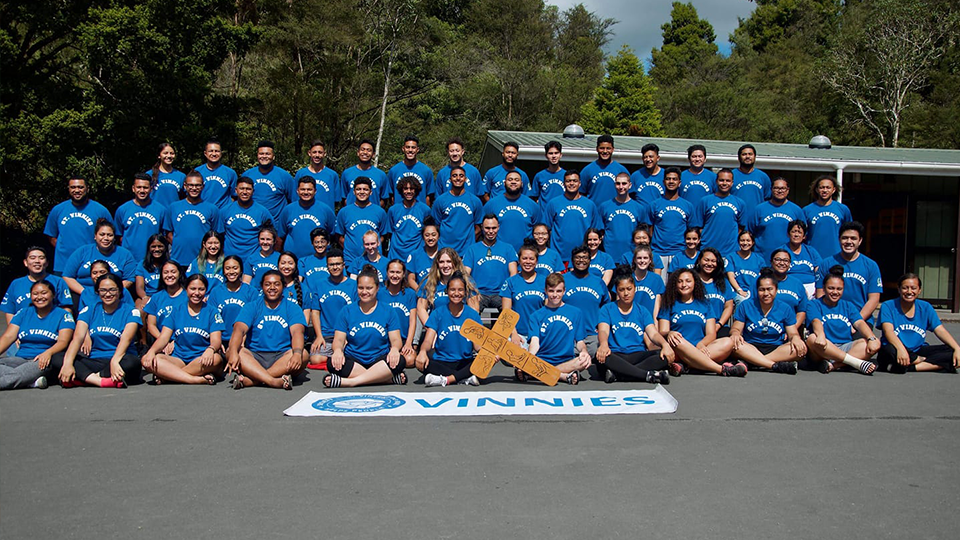 The scope of the work grew significantly during the COVID19 lockdowns. Delphina and her youth team led a COVID19 foodbank response from the end of March through to November 2020 that supported 19,700 referrals for food assistance.

“In our line of work, we experience a large number of elderly Pacific people who live by themselves and seem to appreciate our company and are grateful for the efforts to provide suitable food for them,” she says.

“We have a face-to-face every fortnight, delivering hot and easy-to-heat meals.  A lot of the tenants we visit live alone in caravans and trailer parks and don’t have the room, resources or facilities to cook.

“The fortnightly visits are really an opportunity to build connections and also advocate for the needs of those who are often forgotten.”

Delphina and her team have made it part of their mahi (work) and aroha (love) by visiting those in several transitional housing outfits throughout Auckland, including caravan parks and motorhomes, resulting in the youth forming solid and trusting relationships.

For Tofilau Bernadette Pereira, Member of the NZ Order of Merit to the Pacific Community & Women, becoming as sustainable as possible and growing their connections with like-minded organisations is key to the programme’s future.

“A generation of young Pacific leaders we met when they were 13 or 14-years old are emerging now and breaking the stereotypes of our people which they’ve been previously cast in,” says Tofilau Bernadette Pereira, National President of P.A.C.I.F.I.C.A.

“Covid-19 has been a real game changer and the challenge for our Pacific communities is to see how we can make it more sustainable in the long term,” she says.

“We’ve been working together to establish more platforms for our young people to live out their dreams as to who they actually are and what they’re capable of.”

Its members publish the Auckland Vinnies Weekly update on the news platform for the Ponsonby St Vincent de Paul Centre.

“Our participants embrace the satisfaction and joy of working alongside thousands of people committed to putting their faith into action through the service of others,” says Del, whose youth team also consists of Savi, Reuben, Lucia, Joachim and Bob.

“It also exciting to have our youth at the helm, creating a Pasifika response to tackling food insecurity. We currently have a triage team Vavao, Ann Margaret, Midori, Fatima, Martin and Beau, who receive the calls and also advocate for those seeking support, she adds.

“With more than 70 foodbanks shooting up all over the place in Auckland, there’s growing concern about the security of our food supplies to feed our people. It’s vital we know where it’s going and how it’s being distributed to ensure those that need it the most receive it first". 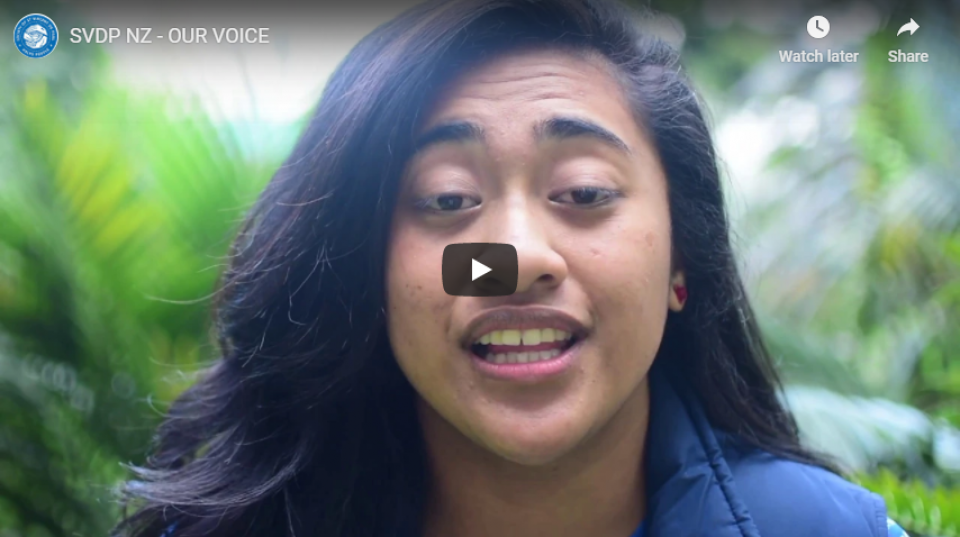