Prime Minister Rt Hon Jacinda Ardern formally apologised to Pacific communities impacted by the Dawn Raids in the 1970s at a ceremony staged at Auckland Town Hall on 1st August 2021. 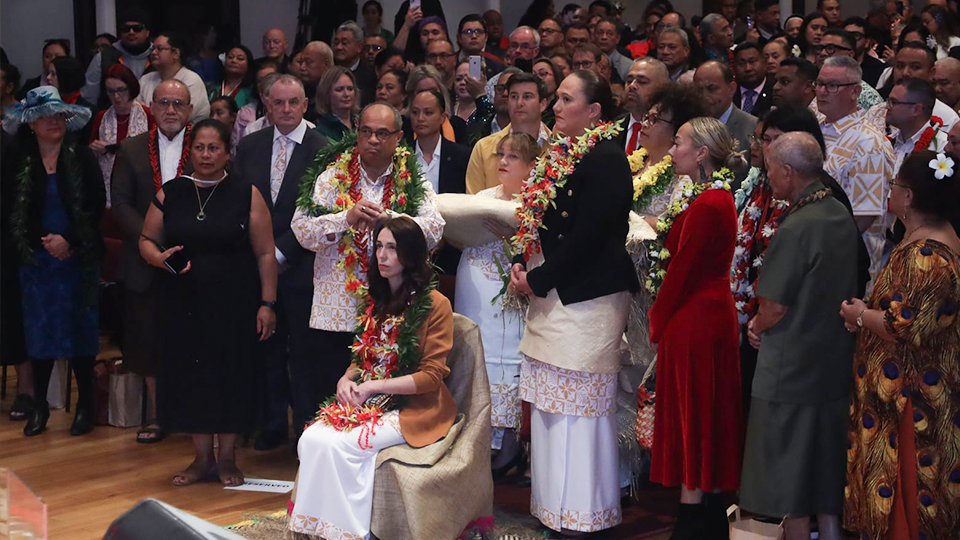 Prime Minister Jacinda Ardern has had a mat draped over her as part of a Samoan Ifoga ceremony, as the Government formally apologises for the dawn raids of the 1970s | Credit Image: Apulu Reece Autagavaia

Between 1974 and 1976, a series of rigorous immigration policies were carried out that resulted in targeted raids on the homes of Pacific families. The raids to find, convict, and deport overstayers often took place very early in the morning or late at night. The Government acknowledged that the raids were severe with harsh verbal and physical treatment, which gave rise to the term the “Dawn Raids”.

Prime Minister Ardern offered on behalf of the Government a formal and unreserved apology to Pacific communities for the discriminatory implementation of immigration laws that led to the Dawn Raids.

“The Dawn Raids period cast a shadow over our shared history.  Upholding immigration laws is one thing, but the Dawn Raids went well beyond that,” the Prime Minister said.

“Whole communities felt targeted and terrorised. The raids were absolutely discriminatory. Expressing our sorrow, regret and remorse for past actions is the right thing to do and provides an opportunity for closure and reconciliation.”

The Minister for Pacific Peoples, Aupito William Sio, says that, looking back, it’s clear the immigration laws were discriminatory.

“Pacific peoples, Māori and other ethnic communities were specifically targeted and racially profiled, which was wrong and should have never happened,” Aupito William Sio said.

“In 1986 the Race Relations Conciliator found that between 1985 and 1986, while Pacific peoples comprised roughly a third overstayers, they represented 86 per cent of all prosecutions for overstaying. Racially targeting Pacific communities created a decades long false impression of the status of Pacific New Zealanders.

“During the same period, overstayers from the United States and Great Britain who also comprised roughly a third of overstayers made up only five per cent of prosecutions,” Aupito William Sio said.

The Government has, as part of the formal apology, committed to honour Pacific ways of seeking reconciliation. It will be providing:

It will also be providing resources that are available to schools and kura who choose to teach the history of the Dawn Raids, which would include histories of those directly affected.

The Ministry for Culture and Heritage and Ministry for Pacific Peoples will provide support to enable Pacific artists and/or historians to work with communities to develop a comprehensive historical record of account of the Dawn Raids period as an additional goodwill gesture of reconciliation.

Ifoga means to bow down, or lower one's self. Ifoga is when an offender covers themselves with a Samoan fine mat as an atonement for their or their kin's wrongdoing. The covering occurs in front of the house of the victim. It is then up to the victim and their family/village on whether to accept the ifoga. This can take some time, to allow the offender to pause and think about their actions while in the darkness, as well as time for the victim and their family to consider the future impacts of their decision, whether to accept or not. This is a public gesture before the entire village, as witnesses of this act of forgiveness.

In Samoan culture, we talk about the "va" which roughly translates to relationships. When there's an offense committed that is called "soli le va" or trampling on the relationship.

The Samoan fine mat is referred to as many names. One such name is "tasi ae afe", which can mean one act can affect a thousand. This refers to the act of atonement by the offender, which can forgive many others, including the offender's family, extended family, and village.

Another name for the Samoan fine mat is "pulou o le ola" which means “being covered to gain life”. This refers to the origin of the Samoan fine mat, where, in one version, girls from Amoa were weaving the first fine mat. They were abducted and taken to Tonga where they ran into some controversy and were accused of hiding the Tuitonga's brother. In pleading for their lives, the girls covered themselves in the fine mat they had woven.

Explanation provided by Apulu Reece Autagavaia, chair of the Otara-Papatoetoe Local Board and a Samoan community leader in Auckland.

Shared Pacific values underpin Pasefika Proud
Our vision and approach are underpinned by the following shared Pacific values, which help to nurture and sustain family and community wellbeing. They are protective factors for Pacific peoples: