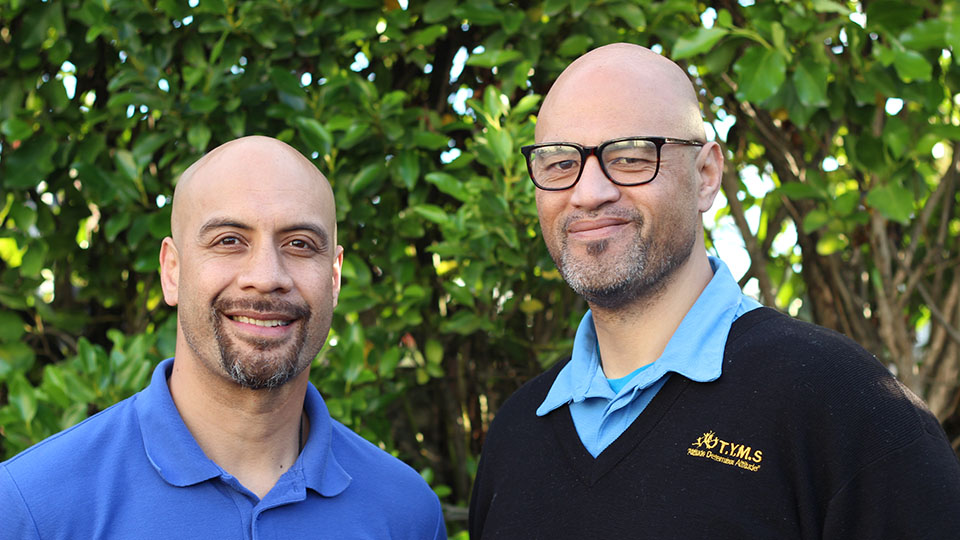 When Robson Tavita’s father, Tuilaepa Ropisone Tavita, died in 2005, Robson (pictured, right) became determined that it wouldn’t be in vain. Inspired by his late father’s belief in respect, honour, discipline and values and the importance of culture to one’s identity, Robson gathered together an eclectic group of trusted friends, mainly Pacific and Maori, who knew his father well.

“It was one of the first mentor programmes with a model based on fa’a Samoa, the Samoan way,” he recalls.

“That involves respect, honour, discipline, values and the importance of culture to our identity. My father said that those of us from the islands were told we shouldn’t speak our language because we’re now in New Zealand and have to adapt. But retaining fa’a Samoa within our family has provided strength at a time when so many are struggling in today’s environment.”

Robson’s initial involvement with youth came through a trust that included the New Zealand Police in Mangere. As a social worker, he had a range of duties, including collecting financial reparations, which he didn’t enjoy, to getting youth back to attending school, which he did enjoy, despite its challenges.

“My responsibilities also included getting our youth drug-tested, which made me accountable to the families as well, resulting in plenty of hard conversations with a lot of them,” he recalls.

“But sometimes the families themselves were drinking at home, with the youth getting into trouble on the streets at 2am in the morning. Our social workers would often turn up to calm things down.”

In 2010 Robson founded Tuilaepa Youth Mentoring Services (TYMS), a cultural and relationship-based intervention service providing mentoring, advocacy and support for Pacific and Maori youth and their families based in the West Auckland suburb of Swanson

It was set up with a Vision, a Mission and a Primary Objective for young Pacific and Maori.

Vision: Pacific and Maori youth to feel a sense of pride and belonging in our communities, living their full potential

Mission: To break the cycle of disengagement

Primary Objective: For our Pacific and Maori to be well-educated, well-trained and well-employed.

Robson’s sporting passion is basketball, having been a veteran on the national basketball scene since the 1990s, representing the Waitakere Rangers from 1990-95. He was still playing competitively at a national level well into his 40s.

Dale Rasmussen, General Manager Operations and Finance, joined the organisation in 2015. A lawyer and professional rugby player in the UK who also represented Manu Samoa, Dale has been involved with a number of youth initiatives, including the Young Dad’s programme. He was attracted to join T.Y.M.S due to the on-the-ground work they were doing in the community to stem the tide of underachievement with Pacific and Maori youth.

“I could see how amazing and effective Robson’s programme was, and I just wanted to help articulate it and spread it so more lives could be reached,” says Dale.

“We’re in a space that’s increasingly complex, with the increasing number of young people affected by FASD and other cognitive issues.”

He adds that extensive research indicates a link between someone’s personality and the functions of the prefrontal cortex, which is the brain region implicated in complex cognitive behaviour, personality, decision-making and the ability to moderate social behaviour.

“If they’re brought up in a home with three or more high risk factors (eg. exposure to domestic violence, a high level of parent-child conflict), it can lead to toxic stress on the young person resulting in a loss of prefrontal cognitive abilities (executive functions), including the ability to plan, focus, adapt, self-manage, multi-task, follow basic instructions and regulate emotions,” Dale says.

“For some of our kids living in a constant state of stress, it can often result in a sustained sense of fight-or-flight mode and an inability for them to express themselves and operate effectively in everyday life.”

The approach to youth wellbeing is captured in its Pacific Youth Wellbeing Framework, based on the Fonofale model and developed out of its T.Y.M.S practice. Culture, identity and a sense of belonging provides the shelter, the pillars stand for spirituality, physical health, mental health, cognitive abilities and social relationships with the family as the base, improving communications, fostering meaningful connections, roles and responsibility within the family.

Robson adds that they hold and measure everything they do, from assessments and reports so they can validate it. Not that he himself needs a report.

“We have a young Samoan boy who joined us,” he says.

“I asked him if he knew how to speak Samoan. He said no, but he could understand it. My dad said our culture is there and it’s about respect, for yourself and for others, being proud of who you are and where you’re from, instead of trying to be someone like the late Tupac.”

T.Y.M.S has a grassroots programme focused on addressing the underlying needs of the youth they support. Its qualified educators and youth workers act as ‘academic mentors’, providing one-on-one and group mentoring, addressing needs such as emotional health, practical life skills, physical wellbeing and cultural identity. It partners with families/whanau/aiga and communities to build positive and ongoing support structures that reach beyond the programme.

“The tipping point for the programme to become successful is when that point has been re-set in their perception of themselves,” says Robson.

“I’ve seen it myself with an amazing transformation of a guy with a long and bad rap sheet. That’s why people come to us. They see value and genuine change in what we have done.”