Pasefika Proud are proud to support I AM ME, an event created by women for women to share experiences for a better tomorrow. 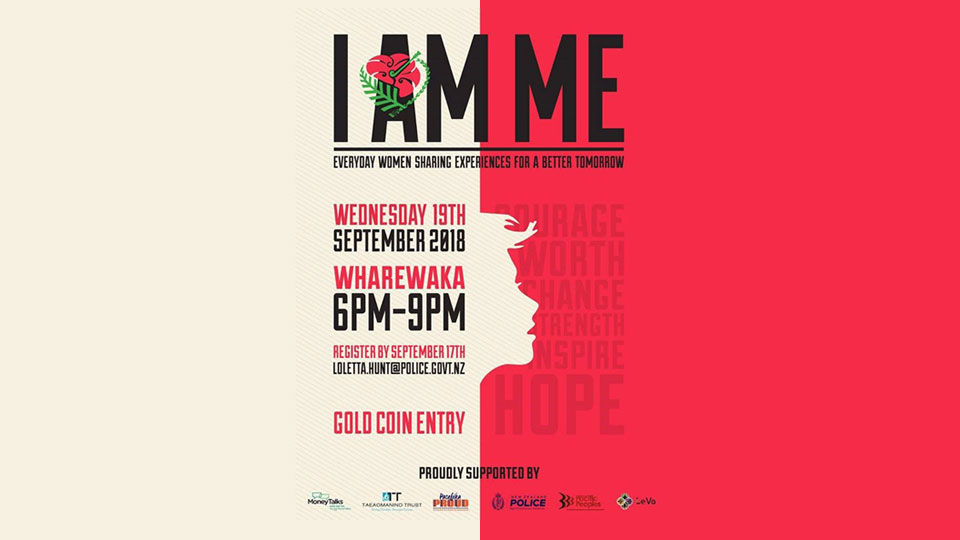 Five everyday women of Maori and Pacific descent will be sharing openly and honestly about tapu subjects and how her past has shaped, and is continuing to shape, her future.

Supported by Pasefika Proud, the event seeks to empower and inspire women to have the courage and strength to speak out and spark change.

The aim is to create a safe place for women to share free from judgement or consequences for the sake of a better tomorrow.

While the event is for our Pacific and Maori women, it is open to all women interested in being inspired.

The event is open to all, but there is a gold coin entry. Attendees are asked to register by Monday September 17th to Loletta Hunt of the NZ Police via email.

For more information check out I AM ME on facebook.

Loretta Hunt-Tevaga: Loretta comes from a background of family, faith, culture and a love for basketball. Although she grew up in a single parent household, she never felt like she missed out on anything. Loretta has struggled with depression and suicide, which stemmed from past relationships as well as in her career. While growing up, Loretta experienced discipline, but never violence until five years ago. She has fought these challenges and refuses to be a victim. She continues to face struggles in her life, from suffering from alopecia areata (hair loss), to having high grade abnormal cells in her smear test. She sees herself not as a survivor, but a fighter. With these experiences she wants to inspire other women to stand up and let their voices be heard.

Treena Madar: From victim to VICTOR, Treena Madar, a Wellington-born Samoan and self-confessed "overcomer", is not afraid to keep it real. Having battled alcoholism, depression, anxiety and mental abuse for over three decades, Treena has completely transformed her life in less than four years because of her journey with Christ. Now a Youth Pastor, Treena spends her Friday nights ensuring young people don't fall into the same traps she did. She has a passion to empower Pacific island female youth to face their issues head-on, finding any opportunity to offer her mentorship, which includes managing a basketball team (a sport she knows nothing about!) at Wellington East Girls College. A biological mother of two, a spiritual mother to many, and a wife to the man of her dreams, Treena believes that in order for us to succeed as a people, we need to keep it real and hold nothing back.

Seini Talainaivalu: Seini ended up on the streets, lost in love, stuck between who she was and who she wanted to be, was in a controlling relationship. Born in Fiji and now in her second marriage, she is happily married to someone who takes her for who she is. Family is everything to Seini. With three sons, a daughter-in-law and two grandchildren, she is studying at Victoria University and is graduating this year. Seini loves reaching out to those who have walked in her shoes and are filled with fear, doubt, blaming, and never-ending questions day after day and night after night. She loves reaching out to those who have felt the pain and confusion through so many challenges. Seini strives to help women get through their struggles.

Amanduh La Whore: Amanduh "the struggle is real" for women who have struggled, or know women who have. A nationally and internationally recognised iconic gender Illusionist, Amanduh has been a resident of Wellington since 2004. Noted for her compassion and awareness of the LGBTIQ history, Amanduh advocates for her community at every opportunity. Her respect and support for her elders has kept her in good standing with prominent members of the wider LGBTIQ community. Amanduh can take her place as an integral member of Wellington’s high society, yet remains willing to work alongside kitchen hands, cleaning toilets and being the tea lady. This sets her apart as an Ambassador, able and willing to identify support needed then offering that support.

Synteche Collins: Of Filipino, Maori and European descent, Synteche struggled for many years with her identity and feeling a sense of belonging in New Zealand. After experiencing a series of traumatic events during her childhood, including having to seek refuge in New Zealand, learning what it means to be homeless at a young age and encountering adversity both in the home and during schooling, Synteche was able to find a way to overcome these challenges and understand her value. Now equipped with tools to prevail over life’s challenges, she wishes to share her journey so it will encourage other women to explore their own self-worth.