Ailine Kei is an aspiring social worker who was inspired by the passion in Pacific peoples’ search for solutions to reduce family violence. Born in Tonga, growing up in Auckland and Australia before her family made Christchurch their home, Ailine will never take for granted the loving supportive environment provided to her by her parents Mo’uifo’ou (mother) and Siaosi, father and pastor of the Seventh Day Adventist Church in Aranui. 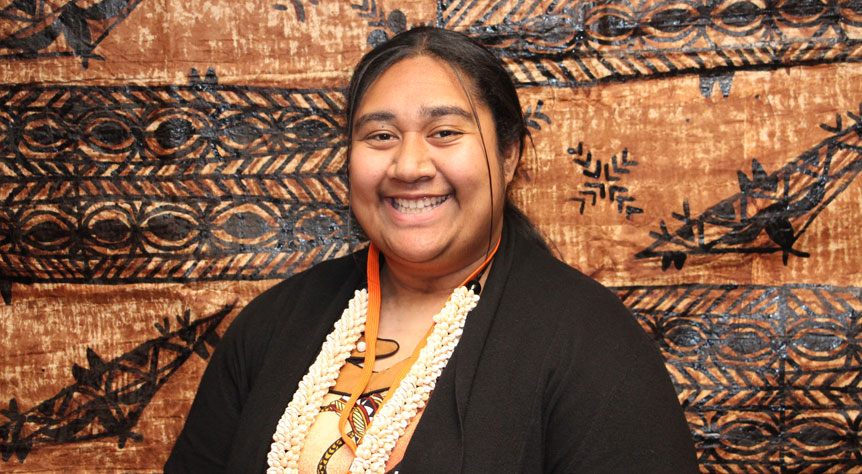 “I’ve grown up in a loving environment, where people were always encouraging,” says the Pacific youth leader.

“I assumed that’s how we were all raised, but I began to realise that I was one of the very lucky ones. I’ve come across young people who were and still are victims of abuse. I know of ones who committed suicide because of it.”

Ailine describes herself as a shy and introverted young girl until around the age of 10. Due to her community-minded parents, she began helping at various events. Seeing her father on the pulpit inspiring others attracted Ailine to public speaking.

Being a participant in the University of Canterbury’s Emerging Leadership Programme also encouraged her to seek a career as a social worker. The experience has taught her that for all her passion for public speaking, being able to listen is the key.

What she also discovered from listening is the need to enter the victim’s environment rather than expecting them to come to you.

“Go to their homes and spend time with them. They’re far more likely to open up,” says Ailine.

“Some of the stories I’ve heard can be quite overwhelming, but I knew what I was getting into and it’s only made me more determined. It’s not about me going to battle for them, but battling with them, particularly for our youth, who are often the victims and are without a voice.”

As a youth leader for her church, Ailine helps organise social events such as a dance or a quiz night.

But as close as she is to her faith, she believes it’s about finding the most appropriate and helpful networks for the person concerned.

“I live in Hornby, which is on the opposite side of Christchurch to our church in Aranui,” she says.

“Because of our involvement in the church, distance isn’t an issue. But it is for many in our community, which we need to be aware of. There are other challenges as well, like being in an environment where they feel safe and know they are valued.”

Ailine encourages youth leaders to strive to reach their full potential, but acknowledges how difficult it was for young Pacific people to uphold the values and teachings of parents who came from the islands, while at the same time navigating a westernised society.

She says exposure to a western environment means Pacific youth may find it very difficult to come to terms with their cultural identity and the identity they adopt in their environment.

“For many Pacific youth it is a typical understanding that you keep quiet, listen, and do as you’re told by your elders- which can come into conflict with the values taught in schools and society about being open and free in what you say. “

Ailine said that many NZ-born Pacific encounter this issue when it comes to decisions made about or around them.

However the problem is not just with Pacific youth but with elders and leaders too, in that too many leaders ask for feedback but only accept positive feedback.

“If you want the programme or the initiative to progress we need to accept negative feedback as well as good.”

It’s important for Ailine to be able to attain certain information that she can relate back to her church and youth group.

“What we have in common is that we’re all Pasefika, we’re people of faith and we want to listen to their stories so we can help them do something about it. It’s great to be able to be alongside so many who are like my parents - selfless and continuously putting others before themselves.”